From 11 to 20 March, 2019, the “Media Advocate” initiative followed online media reports on the Prime Minister of the Republic of Armenia, Nikol Pashinyan’s personality and activities.
34 leading Armenian news agencies have been monitored.
In the specified period, 3138 articles were declared, 646 of which were negative, 256 were positive and 2236 were neutral.
In negative articles related to the Prime Minister one may find criticism mainly from former authorities, though recently there may be noticed an increased public criticism as well. People’s expectations of reforms and ongoing disappointments are the main reasons of it.
The Prime Minister is trying to somehow mitigate the situation, but he is unable to neutralize the accumulated dissatisfaction yet. 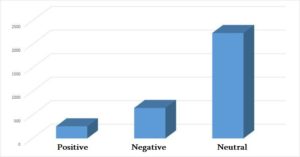