On January 12, an article was published on armtimes.com, according to which the editor-in-chief of one of the Armenian news outlets was accused of collaborating with criminal authority and former NSS (Natonal Security Service) head Arthur Vanetsyan.

“Media Advocate” Initiative was informed that Boris Murazi, the editor-in-chief of politik.am, stated that the mentioned article meant him. Some tried to log in to his Facebook page. He informed that recently one of the employees of Public Relations and Information Center SNCO under the Prime Minister’s Office, has written him. Head of the SNCO Hovhannes Movsisyan met with one of the editor’s relatives and tried to collect some information.

“Media Advocate” also got informed that Astghik Matevosyan, editor of antifake.am news outlet, in her turn, announced that she noticed an access attempt to her Facebook page. The editors blame the prime minister and point out that it was done under his instructions.

Considering these cases and statements, “Media Advocate” initiative expresses its concern and urges the authorities to fight against illegal information collection and encroachments on the freedom of speech and expression along with their fight against fake accounts.

Such actions do not promote freedom of the media but restrict the right to freedom of expression.

In addition, personal data collection in the Republic of Armenia is a criminally punishable act. 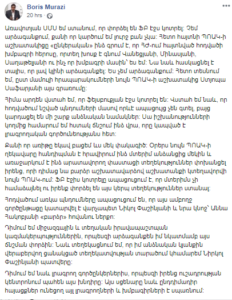 Hrayr Tamrazyan’s guests on Azatutyun TV’s January 19 broadcast were Chairman of
The Prime Minister’s condolences message on the death of Georgi Kutoyan was
“Media Advocate” Initiative recalls that 13 years ago on this day, January
Yesterday, after the news of Georgi Kutoyan’s death, a stream of opinions
“Media Advocate” initiative condemns the media’s actions which go beyond the rules
Go to Top