From 11 to 20 July, 2019, the “Media Advocate” initiative followed online media reports on the Vice-president of the National Assembly of the Republic of Armenia, Alen Simonyan’s personality and activities.

In the specified period, 30 articles were declared, 22 of which were negative, 1 was positive and 7 were neutral.

Vice Speaker of the National Assembly Alen Simonyan has not been in the spotlight of the media during our monitoring period, but the graphic received as a result of the monitoring, is not promising. The news outlets touched upon the fact that Alen Simonyan was eating sushi during his stay in the United States. According to media reports, this fact was criticized because he attended a luxurious restaurant and the news outlets add that after the criticism, the vice-speaker called people to “throw themselves off the bridge” and those who criticized him were blocked.

It turns out that in the last monitoring period, the news outlets focused on Alen Simonyan’s outgoing visits. Alen Simonyan, in his turn, has not been active in terms of political activity. If publications correspond to reality, parliamentary diplomacy should change its way of working. 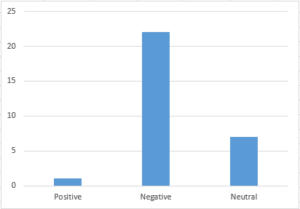