From 1 to 10 July, 2019, the “Media Advocate” initiative followed online media reports on the Member of the National Assembly Lena Nazaryan’s personality and activities. 35 leading Armenian news agencies have been monitored.

In the specified period, 40 articles were declared, 3 of which were negative, 2 were positive and 35 were neutral.

According to our monitoring results, the news outlets rarely write articles or publish news on the NA vice speaker Lena Nazaryan, besides Lena Nazaryan’s public and political activities are not active lately. The role of Mrs. Nazaryan, the NA Vice Speaker may be great “behind the scenes” and party work but the case is that the NA Vice Speaker should also be publicly seen and discussed.

MP Sofya Hovsepyan is against the ratification of the Istanbul Convention, which caused rumors. Lena Nazaryan did not support her colleague, and the media reported all that in a negative light. As a positive fact, one of the projects authored by Lena Nazaryan which was adopted by the National Assembly was mentioned. 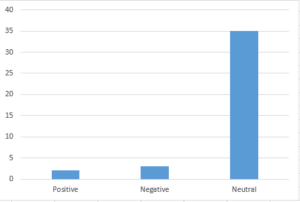