From 1 to 10 July, 2019, the “Media Advocate” initiative followed online media reports on the Member of the National Assembly, Edmon Marukyan’s personality and activities. 34 leading Armenian news agencies have been monitored.

In the specified period, 137 articles were declared, 17 of which were negative, 7 were positive and 113 were neutral.

Edmon Marukyan has returned to our monitoring list, but the results are not again reassuring. The media field continues to pay less attention to the MP, while Edmon Marukyan is not distinguished by his active political activities. Edmon Marukyan was noticed in Russia with Armen Ashotyan in a café, which also led to criticism. Then the news was spread that during the important session of the conference titled “Development of Parliamentarism” in Moscow, where one of the Azerbaijani MPs had a very targeted speech on Artsakh, Edmon Marukyan and the rest of our delegation were absent: this also led to criticism. Then, according to the publications, Edmon Marukyan, the other members of the delegation and Ararat Mirzoyan also had a serious conversation on that issue.

It turns out that Edmon Marukyan, as the leader of a parliamentary opposition, is not an individual that is much talked about, and the experience of an international meeting was a failure this time. 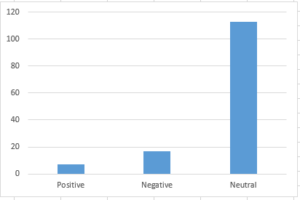