From 11 to 20 June, 2019, the “Media Advocate” initiative followed online media reports on the wife of the Prime Minister of the Republic of Armenia, Anna Hakobyan’s personality and activities.

In the specified period, 36 articles were declared, 3 of which were negative, 4 were positive and 29 were neutral.

There are few articles on Mrs. Hakobyan during the monitoring period, which is an unprecedented result. This proves that Anna Hakobyan’s sociopolitical activities are passive. According to the results of the monitoring, positive articles exceed the number of negative articles by one. The principle of wearing Armenian brands adopted by Anna Hakobyan has been assessed positively.

In the negative articles related to Nikol Pashinyan, the news outlets mentioned Anna Hakobyan as well. It is noted that when the Prime Minister’s wife was in the US, the White House did not pay particular attention to meeting her. The news outlets recalled Mrs. Hakobyan’s call for providing free housing to those who are in need. They ask Nikol Pashinyan to publish how many such cases have been registered and, as a conclusion, all this is considered as a populist call. 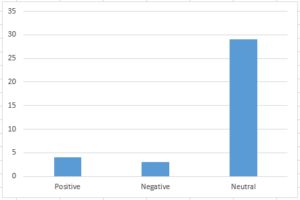