From 1 to 31 May, 2019, online media coverage of the Artsakh conflict was in the spotlight of “Media Advocate” initiative. 35 leading news agencies have been monitored. The articles were selected through international analytical programs.

During the specified period, 5175 articles were monitored.

According to media reports, there are contradictions between the authorities of Artsakh and Armenia which are expressed both at the state and international levels. For example, Artsakh authorities were not invited to official events of the First Republic Day celebrations.

The press close to the government constantly reminds of the theses preparing for peace, which the oppositionists consider dangerous and point out the joint Turkish-Azerbaijani military exercises.

“Media Advocate” initiative calls on the media outlets to be attentive to the most sensitive Artsakh issue, and not to be manipulated. To be guided by state interest when doing analyses, neither support the pro-governmental not the oppositional views but to approach the issue objectively. 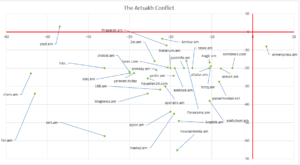