From 1 to 31 March, 2019, online media coverage of the Artsakh conflict was in the spotlight of “Media Advocate” initiative. 34 leading news agencies have been monitored. The articles were selected through international analytical programs.

During the specified period, 5797 articles were monitored. 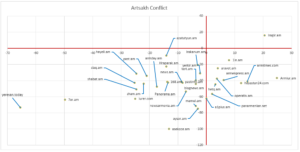 The monitoring period coincided with the Pashinyan-Aliyev meeting which was in the spotlight of news outlets. The graph indicates the news agencies supporting Prime Minister, and vice versa. The main reason for the criticism was that the Prime Minister was negotiating about the Artsakh Conflict without a representative of Artsakh, while he stated before that Artsakh should become a negotiating side. Besides, another reason for criticism became the lack of information related to the meeting. In fact, the public had to look for information in Azerbaijani sources. The fact that Azerbaijan positively assessed the statement of the co-chairs was also criticized: according to experts, it meant nothing but a failure in this stage of the negotiations.