From 1 to 25 March, 2019, the “Media Advocate” initiative followed online media reports on the Member of the National Assembly of the Republic of Armenia, Gagik Tsarukyan’s personality and activities.

In the specified period, 181 articles were declared, 32 of which were negative, 13 were positive and 137 were neutral.

From the study of negative and positive articles it becomes clear that Mr. Tsarukyan is not perceived as a politician. The attention is not paid to the deputy’s political statements: he is considered as a wealthy businessman. 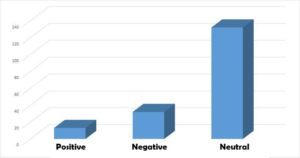