From 11 to 20 March, 2019, the “Media Advocate” initiative followed online media reports on the President of the Republic of Armenia, Armen Sargsyan’s personality and activities.

In the specified period, 861 articles were declared, 13 of which were negative, 29 were positive and 819 were neutral.

From the 20-day results, one can conclude that the PR team of the president quickly orientates and properly counteracts at the right moment preventing the impact of the negative articles on public opinion. 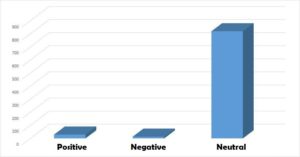